Fun Fact: He has a Bachelor of Science in Physics from UCLA, and worked in various fields of engineering for over a decade.

Growing up in the north suburbs of Los Angeles, James was surrounded with and involved in sports since a young age. In his early 20’s, after taking a Yoga class at a local gym, his curiosity began to peak, and he continued to maintain a consistent physical practice. Fast-forward to 2005, he moved to OC and immersed himself in various styles of Hatha Yoga (the physical practice of Yoga), namely, Bikram’s sequence, and Ashtanga Vinyasa Primary Series. In Parallel, he dabbled in a bit of martial arts for several years, intrigued by the grappling arts, and realized the connection and benefits of his Yoga practice to Brazilian Jiu-jitsu and his overall health and fitness. He felt more limber, stronger, balanced, and more importantly, there was an uncanny awareness of breath and how to better control it during challenging physical exertions. Having studied under a couple of veteran teachers from the East Coast as well his own studies with well-known literary work on the Yogic System, James excels in leading strong yet mindful classes, with creative sequencing and particular attention to detail, nuance and alignment of asanas (Yoga postures), guiding his students through engaging sadhanas (Yoga practices) rooted in Vinyasa Krama. Presently, while he is well versed in teaching other modalities of Hatha Yoga (such as Yin and Restorative), he primarily teaches “Vinyasa” style classes at Ekam Yoga. 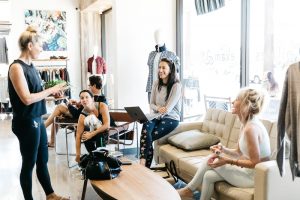